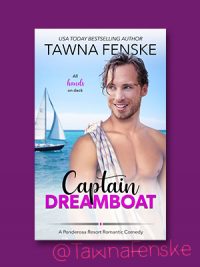 All hands on deck.

Jonathan Bracelyn pours his soul into saving the world, and he’s still nowhere near cancelling out the sins of dear ol’ dad. But when a medical crisis prompts Jon to toss his sister the ultimate lifeline, he’s forced to hang up his captain’s hat and hit pause on the one thing that makes him…well, him.

At least he has Blanka Pavlo’s heart-flooding smile to buoy his spirits. A brilliant scientist, she knows things can’t last with the do-gooder Bracelyn brother. Not even if he kisses like a dream and boasts biceps as hefty as his heart. Blanka’s learned the hard way how lonely life is in the shadow of a saint, so she’s giving the hottie hero a wide berth.

Except Jonathan sucks at self-care, so maybe she’ll lend a hand (and other tingly parts) to help him out. Soon, they’re bonding over awkward bubble baths and a disturbingly homely cat, while struggling to remember it’s all temporary. But the harder they brace for goodbye, the louder their hearts declare they’re already in too deep.