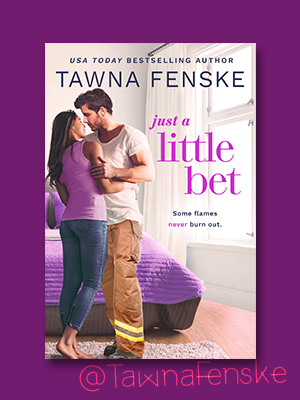 Some fires never burn out.

After a night of too many drinks, smokejumper Tony Warren and his best friend, photographer Kayla Gladney, come to the realization that they’re both bad at love. They even tried dating each other, but that crashed and burned, too. Now he’s got the hangover from hell and the certain conclusion he’s just a shit boyfriend. But Kayla thinks he’s a straight-up commitment-phobe.

So they make a bet—they’re going to hunt down his exes and decide once and for all why he’s so unlucky in love. Terrible boyfriend or commitment-phobe. Why does either answer feel like he’s still losing?

But between roadside burgers and late night detours, they discover some fires never burn out—like the one slowly smoldering between them. And suddenly losing feels a whole lot like winning again.

“I LOVE, LOVE, LOVED this book! The characters, the well flowing storyline, the “heat”, and FIREBALL!!! I love a great dual POV and this one was “on fire”!” –Nicole W., Goodreads

“A fun, witty and interesting road trip story of second chances and all that entails.” –Karen R., Goodreads

“This book will pull at your heart strings! Tawna does an amazing job at making her characters feel relatable. Tony is so complex you can’t help but root for him. Kayla has a huge heart and her willingness to hold on was inspiring.” –Heather P., NetGalley

“This story has all the heat and all the heart!” –Viper S., Goodreads

“This is one romantic road trip to remember!” -Erika C., NetGalley”This is the best book she’s ever written.” – The Rogue Book Reviews

“One of the best books I have read this year.” – Stephanie D, Amazon