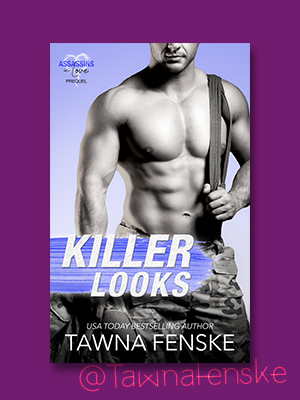 But first, the bad stuff. Dante’s done with hitman life, but there’s one last job to do. A favor to the Duke of Dovlano targeting brutal gun runners. Dante calls on comrades, Matteo—brilliant, surly, lethal—and charming Sebastian “The Dentist” LaDouceur. Each has skills he’s honed to take out threats at all costs. They’ve also got soft spots for family, lost loves, baby farm animals, and iambic pentameter.

But when the job falls apart, their carefully laid plans go up in smoke. Can three killers with a conscience stick together, or is it every man for himself?

The words roll through his brain as he checks the scope on his sniper rifle. He’s calibrated it roughly 2,873 times in twenty-four hours, but Dante’s always cautious.

Cautious, and clear with his intent.

He’s hoping he nailed that when he outlined his terms for the Duke of Dovlano.

“No killing, right?” He folded his hands on the Duke’s desk. Tried not to tug his collar.

His Grace stared with furrowed brows. Pulled his ear in some secret signal or maybe—

“I’m sorry, my hearing’s failing.” The Duke frowned. “Did you say no killing?”

Yeah, it shocked him, too. There’s psychological shit he should probe with his therapist if he had one. Dante’s not a guy with a shrink. He’s a guy with a job to do. One final job shutting down Dovlanese gun runners and a terrorist operating on American soil.

Seattle soil, to be precise.

“When’s our guy making contact?” That’s Matteo on his headset, so Dante drags himself back to the job.

“Within the hour.” He lifts his scope and peers out the hotel window. It’s drizzly here with damp, irritated pigeons flapping on a concrete ledge. A mottled bird with an iridescent green head struts close, looking glum. Dante touches the glass. He’d let them inside if he could. Give them cracked corn from the bag he keeps in his duffel. A man never knows when he’ll need to feed ducks in a park.

“Is Sebastian back?” Matteo’s voice again, so Dante stops staring at pigeons.

“Not yet.” Seb’s setting up surveillance in the boiler room. That’s where the deal’s going down. Three Dovlanese dickheads with a truckload of guns will meet warlord Corlan Wentworth here at Hotel Spirata.

Allegedly. Dante doesn’t trust the intel. That’s why he pulled Matteo in, persuading his tech-savvy pal to run surveillance. “I know you’re in hiding,” he’d told Teo last week, “but I’d have you safe in a van outside and you won’t get your hands dirty and the money—”

So. That’s that. Matteo signed on and so did Sebastian. Speak of the devil—

“Hey, big guy.” Sebastian strolls in smiling, dark hair flopping over one eye. The man looks like a model from those American men’s magazines. Rumor has it he’s been a Hollywood stunt double. “Any updates on our man?”

“None.” Dante checks his burner phone. No word from the Duke. “You scouted the location?”

“Affirmative.” Seb paces the room, picking up knick-knacks and putting them down. “The locks are solid. What happens when three armed gun runners get locked in a room with an equally armed and sleazy terrorist?”

It’s also the plan. A good one. “You confirmed the weapons are on the way?”

“I hacked the tracking system on the truck.” There’s the clack of a keyboard from wherever Teo’s hunkered down. “Weapons are on I-5 headed north. Wentworth should see the truck by noon.”

Not if he and Seb and Teo do their job. That’s the deal, the reason Dante said yes to the job. His last job, though he’s said that before and look where it got him.

But this one matters. The guns are going to a war-torn country where they need automatic rifles like they need fur nipple tassels. He’s watched the news, seen the violence against women and kids. It turns his stomach.

Oh, and he cried at Lady Isabella’s wedding. Cried, like a big man baby. Definitely time for a change.

“Hey, Cheez-Its.” Sebastian grabs the box off an end table. When Dante glares, he backs away with the crackers. “I promise I’ll replace your stash, okay?”

“You said that last time.”

“And you failed to specify it’s vital they be white cheddar instead of yellow.” Seb throws a handful in his mouth. “Besides, too many crunchy snacks can be tough on tooth enamel.”

Fucking Sebastian. The Dentist, he’s called in certain circles. All circles. The man’s a real goddamn dentist. Has his own practice and everything.

“You doing okay?” Seb claps his shoulder, concern in his eyes. Some of the tension dissolves. It’s why Dante brought him into their group. “You’re wound pretty tight.”

“We’re about to bring down ruthless gun runners.” Dante checks coordinates for the thousandth time. “You don’t think that’s worth getting tense over?”

Seb pulls a chair out from the desk. “I’ve seen you do that with one hand tied behind your back. Literally—remember that job in—”

Another reason he might be done with this job.

“Hey.” Seb’s voice softens as he kicks the leg of Dante’s chair. “If you ever want to talk—”

“No prob.” Seb goes quiet. “Want to hear a joke about two hunters in the woods?”

He kinda does. “We need to stay focused.”

Sebastian straddles the chair backwards. Grabs another bunch of crackers. “Anyone remember the first job we did together?”

“Paris?” Dante answers Seb’s question, since Matteo’s gone back to typing. “That favor for your old Army pal?”

“Bingo!” Seb snaps his fingers. “God, what did that douchebag terrorist shout before we took him out?”

Dante knows the words. They’ll never cross his lips. “Something derogatory about his wife.”

“The asshole’s last words.” Seb sets the cracker box beside Dante’s favorite Ruger Mark IV Hunter. Not for the first time, he wonders if Seb’s got a screw loose. “Swear to God, he said ‘em in perfect iambic pentameter,” Sebastian continues. “You remember, Teo?”

“Can we please focus on the job?” Matteo mutters a curse in Italian. He’s Dovlanese like Dante, but his mom hails from Rome.

Hailed. Past tense on the mom.

On both parents, same as Dante.

Sebastian’s distracted again, squinting at his phone. Better be a burner  phone, or encrypted with some of Seb’s magical military mojo.

As Dante watches, The Dentist’s smile wilts slowly. Looks like he swallowed a pipe bomb and needs to piss it out.

Time to return the favor. “You okay?” That’s Dante being sensitive and shit.

“Yeah, it’s fine.” Seb pockets the phone. “Family stuff.” His laugh comes out chalky and dry. “Someone mixed up with a crowd he shouldn’t mix with.”

“He need help un-mixing?” Dante’s down for any job to help a friend.

“Possibly.” Seb’s jaw clenches. “Enough about that. Seriously—it was actual iambic pentameter. The words that dickhead yelled before we shot him? I counted the syllables. You really don’t remember?”

Dante sighs. Stands to grab his Barret M95 sniper rifle. A present from the Duke of Dovlano, the day of Clarissa’s funeral.

Nothing says “sorry your fiancée died” like the gift of good firepower. He turns the weapon over in his hands. Stalks to the window and looks out. “You guys ever think about getting out?”

Sebastian nods. “You mean taking the shot from outdoors instead of firing from a sheltered position?”

“Too risky.” Matteo weighs in through the headset. “You’ve gotta calculate wind speed and velocity and choose exactly the right ammo for—”

The job of making people disappear for money. He won’t say that out loud. There’s a lot they don’t say, the three of them.

“Oh, that.” Seb looks thoughtful. “I’ve thought about it. Going full-time with dentistry. Buying a house. Settling down with a sweet girl or—” His grin goes wicked. “Okay, a not-so-sweet girl.” The Dentist laughs. “Gotta keep it exciting.”

“Really?” Dante couldn’t be more surprised if he looked down to see himself sporting a pink bra and leather hotpants. They don’t discuss their personal lives. “Does this woman… uh… know about you?”

A question with many meanings. Matteo picks one. “Not the shady stuff. Not yet.” A pause. “I want her to meet my family.”

It is. Teo’s got two sisters and a grandma he adores. Dante’s never met them, but Teo glows when he talks family. “You’re taking this woman to the farm for dinner?”

“Like Ross and Rachel in Friends?” Sebastian tips forward as Dante wonders when they took out Ross and Rachel. He doesn’t remember that job. “Better get that break thing in writing,” Seb adds.

“Shut up, LaDouceur.” Matteo’s keyboard clacks again. “And for your information, the job wasn’t in Paris. The dickhead terrorist? It was England. London.”

“Shut up!” They say it in sync, Teo and Dante. They make a good team.

All of them, even Seb. The class clown with a killer’s instincts.

Sebastian smiles. “You know you love me.”

He’s not opposed to love. It’s nice, in theory. Maybe someday, if he—

“Fuck what?” Dante squints out the window. A white pigeon cocks its head. “Problem, Teo?”

“Maybe.” More clacking on the headset. “There’s buzz from the police. They’re after our guys.”

“Sellers. The guys in the truck.”

Dante considers that. Not the worst thing, letting the cops catch sketchy gun runners. Might save them some trouble. “What’s the issue?”

“Issues.” Teo snarls. “For one, it’s an undercover op. Two, these cops are assholes. One is, anyway. I don’t know these other guys.”

Seb lifts a brow. “You know a cop personally?”

“Huh.” Dante tucks this in his brain folder. Teo has a cop acquaintance? Not that Dante’s judging. He’s got his own cop friend back at Ponderosa Resort. Nice guy, Chief Dugan. Good poker player.

Maybe if Dante quits the life, he’ll have more time for poker. For baking and fishing and . . . and . . . whatever it is normal American guys do. He should Google it.

“Someone’s coming.” Seb gets to his feet. His shift from clown to killer happens faster than Sebastian whips a Walther PPS M2 from a chest holster. “Are we expecting anyone?”

Alarm floods Dante’s system, but he keeps his eyes flat. A look he’s practiced his whole life. “No.”

He stalks to the door and joins Sebastian. Presses his ear against cold metal to listen.

Footsteps thud closer. He meets Seb’s eyes and nods. Even Teo’s gone silent on the headset.

“The perfect teaser for her new series! I can’t wait to read them all.” -Late Night Luna Reads

“This was a fantastic book!” -Samantha, Goodreads

“Well written and engaging. I am excited to see how the stories for these men play out.” -Tmoldovan, BookBub

“Killer Looks had me on the edge of my seat and heart pounding from about halfway through until the end.” -Misty, Goodreads

“Killer looks is an amazing first look to the Assassins in Love series.”-Becky, BookBub

“This fast paced, action packed, drama laden first introduction is a great read that had me in suspense from the first ‘til the last page.” -Konny, Goodreads

“I can’t wait to see what’s to come in this series!” -KA, Goodreads