Getting Dumped by Tawna Fenske

A serialized romantic caper about a woman who loses her job but finds love, intrigue, mayhem, and a new career buried in the unlikeliest of places. 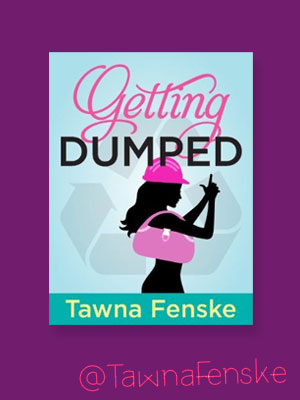 Losing a cushy marketing job only to end up driving heavy equipment at the landfill would be a tough blow for most women.

But JJ Shultz isn’t most women, so she gamely swaps office politics and dry cleaning bills for a chance to crush garbage with a 150,000 pound machine. As it turns out, she doesn’t miss her old life too much…though her love life was sure simpler when she didn’t wear a hardhat every day. Between her hot new co-workers and her on-again-off-again boyfriend, JJ has her hands full.

But the drama kicks into high gear when JJ and her sister, Lori, find evidence of a counterfeit handbag operation – something local police deem only slightly more urgent than collecting fruit flies. JJ soon finds herself unraveling a sinister plot in the company of a tie-tugging accountant, a straight-to-video action hero turned secretary, a suspicious but sneaky-hot engineer, and a host of other characters with questionable hygiene and morals.

What’s Cool from Coliloquy: In Getting Dumped, you have several tantalizing choice points: Who should JJ call when she needs a little comfort? Who should she ask for some sleuthing help? And what does she do when things get dangerous and she’s in need of rescue? Depending on your choices, you not only unlock different paths to solve the mystery but you’ll also get to know each of JJ’s men a bit more intimately.