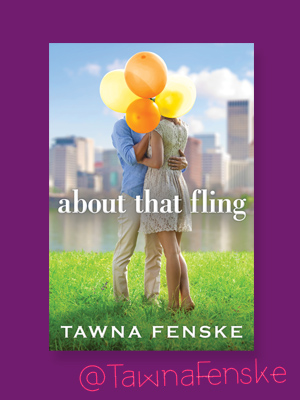 What happens when a one-night-stand goes horribly, hilariously awry?

As the top PR person for the Belmont Health System, bright, beautiful Jenna McArthur knows how to spin bad news and make it sound good. But when her adorable Aunt Gertie—a secret romance writer—urges Jenna to embrace her wild side, Jenna tumbles into bed with Adam Thomas, a guy she’s just met, for a fun and fantastic one-night stand. Too bad Adam is the one guy who’s totally off-limits. There aren’t enough clever words in the world to spin the story in a way that won’t wreck Jenna’s closest friendship or destroy her job.

With the irresistible Adam always around her at work, wearing an aura of temptation like a fabulous cologne, Jenna has to hold tight to her senses to avoid falling for him. Will he take her to the heights of pleasure again—or will their attraction destroy everything she’s worked for?

“What gives me away as non-native to Portland?” Adam asked.

Jenna grinned and took a sip of wine. “Your tie is too straight, your shirt is too pressed, and you don’t appear to have any piercings or tattoos.”

“Maybe you’re not looking in the right places.”

He couldn’t believe how blatantly suggestive his words came out, and he almost apologized. But instead of tossing her drink at him, she grinned wider.

“Maybe I’m not,” she said, her eyes darting to the bare ring finger on his left hand. “I’ll have to do a more thorough examination.” He let his own gaze stray to her ring finger, visibly bare on the stem of her wineglass. He brought his eyes back up to meet hers, and she gave him a knowing smile. “Now that we’ve gotten the obligatory ring check out of the way and reassured ourselves we’re not sharing drinks with a serial philanderer, tell me about yourself,” she said.

Adam leaned back in his chair, not bothering to hide his intrigue. “How do you know I’m not a serial philanderer?”

“No tan line where your ring would be, but there’s a tan line on your wrist. I saw it when you checked your watch a second ago.”

The waitress returned and set down two glasses of wine, along with a platter heaped with at least a dozen mounds of fancy crackers, crumbly cheeses, and cured meats. He plucked an olive and a handful of crackers, arranging them neatly on the small plate in front of him.

“Are you a private detective? Clinical psychologist? International terrorist specializing in wine-bar espionage?”

She laughed, a sound so sweet and musical he wanted to break out a book of knock-knock jokes just to hear her laugh again.

“International terrorist. I like that. Much more exciting than my real profession.” She took a sip of wine and set her glass down. “I think I’m going to claim that as my job for the rest of the evening. Thank you for the idea.”

“Glad to aid with a positive career change.”

“I’m an international terrorist and espionage expert who invented a patented wiretap that doubles as a wineglass.”

“I see you’ve heard of it.” She leaned forward in her seat, and Adam caught sight of a flash of black lace down the front of her dress. “So how about you?”

“What’s your fantasy job for the evening?”

She smiled over the rim of her wineglass. “I think you can do better than that. Something sexier.”

“Sexier,” he repeated. He picked up his own glass, emboldened by the liquid and by the sound of that word coming from those perfect lips. “I’ll be a gigolo.”

“A high-class gigolo. My client—an esteemed senator from California—was meeting me here this evening for a rendezvous, but she got cold feet when she saw the media camped outside waiting to do a big exposé.”

“I hate it when that happens.” Jenna reached for a piece of cheese. She chewed thoughtfully for a while, then took another sip of wine. “It’s just as well. As a terrorist spy, I would have been forced to report any illicit activity to the government, and the next thing you know, the senator’s face would be plastered all over CNN.”

“No, not CNN,” Adam said, keeping his eyes on her face as he unbuttoned his cuffs and began to roll up his shirtsleeves. “In addition to being a sought-after gigolo, I’m also a billionaire media mogul who owns most of the major news outlets around the world.”

He nodded and picked up his glass again, taking a careful sip of wine as he forced himself to hold a serious expression. “Yep. CNN, NBC, ABC, CBS—they’re all mine.”

“That one, too. Also all the newspapers and magazines in the world. I write all the articles for most of them. Very tedious work.” “Good job on last month’s Cosmo cover story on finding your G-spot with a golf club and a pair of stilettos.”

“Thanks. I initially planned it for Sports Illustrated, but we couldn’t get Arnold Palmer to wear the stilettos.”

“Maybe for next year’s swimsuit issue,” she said. “I just turned down the opportunity to pose for the cover, so I know they’re looking for someone.”

Adam snapped his fingers in mock recognition as his brain flashed on an image of Jenna in a bikini. “That’s right! I thought I recognized you as an international supermodel. I saw your GQ cover last month, and I really love that photo spread you did for the Journal of Mutation Research and Genetic Toxicology.”

“Shh!” she said, bringing a finger to her lips. “It’s part of my cover as an international terrorist. Don’t tell.”

“Your secret’s safe with me.”

She crossed her legs under the table again, and Adam tried not to stare. The supermodel thing wasn’t so off base. God, she had amazing legs. He wondered what her real profession was, then decided he’d rather not know. There was something to be said for the thrill of reinventing oneself. He sipped the last of his wine and signaled the waitress for another.

“Fenske’s take on what happens when a one-night stand goes horribly, painfully awry is hilariously heartwarming and overflowing with genuine emotion… There’s something wonderfully relaxing about being immersed in a story filled with over-the-top characters in undeniably relatable situations. Heartache and humor go hand in hand in this laugh-out-loud story with an ending that requires a few tissues.” – Publishers Weekly, Starred Review