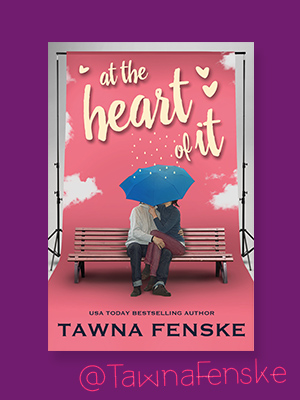 At the Heart of It

Love doesn’t stick to the script.

TV producer Kate Geary is in unscripted heaven. She’s piloting a reality series featuring her favorite self-help guru, Dr. Vivienne Brandt. The Dr. Viv—whose nuggets of wisdom helped Kate get through some of her toughest times. Thanks to Dr. Viv, Kate is almost on the verge of figuring everything out. That is, until Jonah Porter, the superhot book nerd Kate just spent an amazing date with, appears at the show’s first meeting.

Jonah did not want to get reeled into a world filled with invasive crews, pushy network execs, and over-the-top drama, but a connection to the story leaves him no choice. Fortunately, Kate—hot, smart, and funny—helps make it bearable. Now they’re both on the verge of violating their contracts as they find themselves sneaking around off set. But the cameras have a way of finding out everyone’s secrets…especially the ones that can break hearts.

Kate Geary stepped onto the sunny back patio of the B&B and scanned the breakfast tables. Each held a bouquet of daisies and a noisy array of her fellow guests. As she smoothed the skirt of her ankle-length black sundress, Kate breathed in the scent of maple syrup and assessed her options.

Four octogenarians discussing the merits of hip-replacement surgery as they devoured plates of German apple pancakes.

Two fortysomethings bickering about the aesthetic distance and dramatic unity in the Shakespeare production they’d seen the night before.

One thirtysomething guy sitting alone, munching an impressive heap of bacon while reading a children’s picture book with a pig on the cover.

Kate headed for Swine Guy, figuring he was most likely to let her eat breakfast in peace. He looked up from his book as Kate approached, hitting her with the full force of the most striking eyes she’d ever seen. The color, somewhere on the palette between green and amber, reminded her of tree moss or spearmint. They were framed by a pair of black-rimmed glasses and gazed back at her in a way that suggested their owner wasn’t thrilled by Kate’s intrusion.

Kate touched the back of a chair, as much to keep herself steady as a request for permission to plant her butt in it. “Is this seat taken?”

Swine Guy looked at her for a few beats, then picked up another piece of bacon. “Nope. Feel free.”

She pulled out the chair and sat down, then spread a blue-and-green checkered napkin over her lap. A server walked past en route to the next table, and Kate heard her stomach growl. She glanced at Swine Guy, wondering if he’d noticed. His eyes were glued to his book again, but maybe he was being polite.

“I love German apple pancakes,” she said, then wanted to kick herself. Hadn’t she sat here precisely to avoid conversation? But here she was, blathering like an idiot. “And the bacon smells incredible. I thought nothing could top yesterday’s crêpes suzette, but everything looks amazing.”

Swine Guy glanced up, then followed her gaze to where the octogenarians were debating cemented versus uncemented hip-joint replacements as they passed around a white platter loaded with thick slices of ham. He nodded and bit into his bacon, chewing for such a long time that Kate thought he might not respond at all.

“I’m not much of a sweets-for-breakfast fan, so I asked for a bunch of extra bacon,” he said. “I’d offer you a piece, but that seems creepy.”

“Offering bacon to strangers, you mean?”

“Right. Or offering any food to strangers, really.” He gave her a one-shouldered shrug and the faintest hint of a smile.

Kate stuck out her hand, and Swine Guy wiped his fingers on a napkin before grasping hers in a firm handshake. His palm was big and warm and enveloped hers almost completely.

The moss-green eyes flickered with mild interest as he let go of her hand. “Jonah Porter.”

Kate grinned. “Now we’re not strangers. May I have a piece of bacon?”

“I’ve always loved Tawna Fenske’s books for the humor she infuses in her work and there was plenty of that in At The Heart Of It, but it was also an extremely sweet albeit crazy, mixed-up romance.” – Slick, Guilty Pleasures