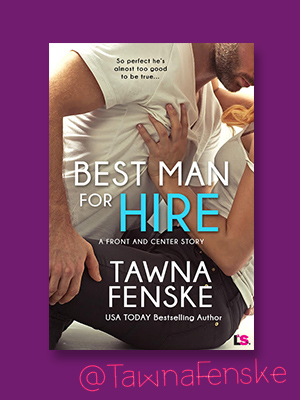 So perfect he’s almost too good to be true…

Anna Keebler makes a living being unconventional. A wedding planner who specializes in more…unusual ceremonies, Anna’s client list includes everything from nudists to paintballers to Little Red Riding Hood enthusiasts. So when her photographer up and quits during a wedding blitz in Hawaii, Anna makes an unconventional decision. She hires a hot Marine to be her new photographer.

Little does she know, Grant Patton is the best man in one of her weddings. He’s so perfect he’s practically a Boy Scout—if Boy Scouts were big, ripped Marines with gorgeous gray eyes, and good at, oh, everything. Especially sex. In fact, his only flaw seems to be that he hates marriage as much as she does.

But Anna suspects the sexy Boy Scout routine is a cover, and if he wants this thing between them to be about more than sex, Grant must reveal the dark past he’s fought so hard to hide…

CHAPTER ONE
Anna clicked her purple ballpoint pen and smiled at the
couple twined together like sticky linguine on her office love
seat. “So you want a fairy-tale wedding,” she said.
It was a phrase uttered in the office of every wedding
planner in America at least once a week. But at Anna’s
Wild Weddings in downtown Portland, Oregon, it meant
something different.
“We’re thinking Little Red Riding Hood,” announced
the bride, a twiggy blonde named Marci, who’d been
referred to Wild Weddings by a couple whose frog-themed
wedding Anna had orchestrated in August. “Darin already
has his wolf costume from last Halloween, and my mother
has this great vintage red cape, and the groomsmen can be
woodsmen, and my grandmother can walk down the aisle
carrying—”
Anna jotted brisk notes in her pink steno pad, pausing
to murmur, “that sounds reasonable,” or “how lovely” to
requests she knew most wedding planners would deem
neither reasonable nor lovely.
“And we want to include the phrase, ‘all the better to
eat you with, my dear’ in the vows,” the groom announced,
giving his bride’s knee a squeeze. “And maybe ‘I’ll huff, and
I’ll puff and I’ll blow you—’”
“That one’s actually The Three Little Pigs,” Anna
interjected. “Not that ‘eat you’ and ‘blow you’ aren’t
charming phrases to include in your nuptials. So do you have
a date and place in mind?”
Marci nodded and caressed the groom’s shoulder, her
orange and blue-polka-dotted manicure clashing terribly
with his green shirt. “Darin and I were thinking springtime
in Hawaii,” she said. “I know it’s soon, but that’s our
favorite time of year there, and we want to do this before
my grandmother is too feeble to travel.”
“Hawaii?” Anna tapped her purple pen on her teeth
and glanced at the calendar. “Any island in particular?”
Darin shrugged. “Not really. My family owns property
on Maui, Kauai, and the Big Island, so any of those would
work.”
Anna glanced at the bride’s handbag perched on the
love seat beside her. A Louis Vuitton Alma Satchel, about
eighteen hundred dollars, if Anna remembered right.
Though they hadn’t talked budget yet, Anna would bet her
left butt cheek money was no object with this couple.
“Tell you what,” Anna said. “I’m actually doing three
other ceremonies on Kauai at the end of March. If you two
wanted to aim for a few days on either side of that, I can cut
you a deal on airfare for my assistant and me.”
Darin perked up, solidifying Anna’s theory that the
wealthiest clients were always the ones most excited by a
bargain. “We can do that,” he said, beaming at his bride.
“Right, honey?”
“Absolutely.” Marci looked at Anna. “Just out of
curiosity, what are the other weddings?”
Anna shrugged. “One nudist ceremony, one paintball
wedding, and one totally normal ceremony.”
“Normal?” Marci scrunched up her face in a way that
reminded Anna of a first grader learning a new vocabulary
word.
“Well, pretty normal,” Anna amended. “The bride is a
friend of a friend who comes from this big military family,
and her overprotective brothers tricked her into hiring
a Marine sniper as her nanny, but now she’s marrying the
manny and—”
“I like the sound of that paintball wedding,” the groom
interrupted, squeezing his bride’s knee again. “The nudist
one sounds cool, too. Maybe we could combine them?”
Marci frowned, clearly unwilling to give up her Red
Ridding Hood dreams. “I don’t know—”
“I don’t advise it,” Anna offered. “Those paintball
weddings always turn vicious, and if you combine it with the
nudist theme—well, you can imagine the welts.”
Anna shot a pointed look at Darin’s groin. His eyes
widened. It was clear he didn’t like imagining the welts. He
gave an uncomfortable laugh and crossed his legs. “That
sounds crazy anyway. People shouldn’t do weird stuff like
that for weddings.”
“Totally,” Marci agreed, beaming at Anna in silent
thanks.
“Okay then,” Anna said, clicking her purple pen. “How
many axes will your woodsmen be needing?”

“Great story, with lots of action, twists, turns and misunderstandings. The characters and their fears, hopes and dreams are shared in a way which makes it easy to relate to.” – Splashes Into Books

“One that you should keep an eye on…will put a smile on your face.” – Book Briefs