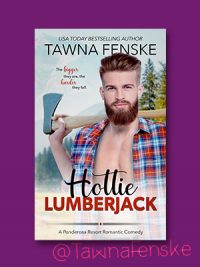 The bigger they are, the harder they fall.

When Mark Bracelyn lumbers into Chelsea Singer’s cupcake shop with an axe, she’s poised to hit the panic button. But he fixes her door, praises her buttercream, and sends her skittish heart pounding like a hammer on a hollow log, so he can’t be all that scary. Chelsea’s sure there’s a gooey marshmallow center under Mark’s tough outer shell, though admittedly she’s been wrong before.

Mark may look like a grungy lumberjack, but he’s also the wealthy part-owner of Ponderosa Luxury Ranch Resort. The lone Bracelyn heir to avoid a childhood of fancy boarding schools, he stays hidden behind the scruffy beard and battered truck. But something else separates Mark from his siblings, and keeping his guard up means keeping his secret–and his family.

When someone threatens Chelsea and her daughter, Mark becomes their personal protector. When he’s not watching her back, he’s watching the rest of Chelsea’s body and warning himself not to touch. With danger mounting, they bond over phallic cupcakes and bizarre bunny behavior, while Mark battles his surging attraction. Can a sweet-toothed mountain man and a cautious single mom escape their histories, or will their hearts land on the chopping block?

There’s an odd sort of teddy bear quality to the guy, if teddy bears had massive biceps and broad shoulders and sharp pieces of weaponry in their paws.

He catches me staring and sets the axe down beside my display case, leaning it against his thigh. That’s huge, too. Everything about this guy is enormous, so why do I feel more turned on than terrified?

The guy clears his throat. “I’m supposed to order two dozen cupcakes for a bunch of tour operators from—”

He cocks his head, genuinely perplexed. “For chopping wood.”

For fuck’s sake. “I mean why did you bring it into a cupcake shop?”

I’m no longer worried he’s here to lop my head off, but still.

He stares at me for a few beats, not answering, not blinking, not even smiling. Not that I could tell, what with the thick beard masking any sort of expression. But I can see his lips, which are full and soft and—

“So you brought it to a cupcake shop?”

The corners of his mouth twitch, but he doesn’t smile. “No, I brought it to the shop down the street. Didn’t want to leave it in the truck because the doors don’t lock. Safety hazard.”

Sort of. If this is really Bree Bracelyn’s brother, he’s a freakin’ gazillionaire. Not that any of the siblings in that family act like it, but it’s common knowledge the Bracelyn kids inherited a lot more than their dad’s ranch when he died.

Suffice it to say, Hottie Lumberjack could afford a truck that locks.

“Chelsea Singer,” I tell him, wiping a hand on my pink and green striped apron before offering it to him. “I own Dew Drop Cupcakes.” As an afterthought, I add, “And I’m not an axe murderer.”