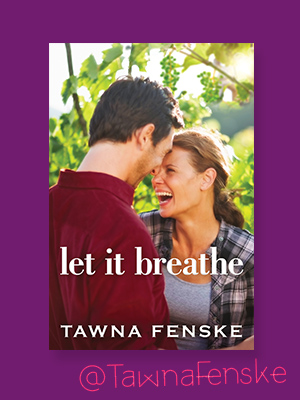 Forbidden fruit can be downright intoxicating.

Vineyard manager Reese Clark is determined to bring her family’s Oregon winery into the big leagues, and she knows building a new tasting room and event pavilion is her ticket there. Having her ex-husband’s best friend—and her secret college crush—turn up to head the construction project, however, doesn’t pair well with her plans. Between her nauseating lovebird parents; her motorcycle-riding, pot-growing grandfather; and her pet alpaca, fond of head-butting groins, Reese has more than enough chaotic characters in her life.

Back in college, Clay Henderson was more likely to be sprawled over a bar than building one. But even if the new clean-living Clay has matured as deliciously as an oak-aged chardonnay, he’s still off-limits. As Reese’s well-laid plans for the winery crumble like bad cork, Clay the newly sober gentleman is sweet enough to rescue Reese from a wardrobe malfunction and still spicy enough to play “I Never” with her. Can he overcome his past rep to offer her a love too heady to ignore?

“I need to call the vet,” Reese said, scanning Leon for any signs of duress. Leon twitched his ears and hummed. “Does anyone know if marijuana is toxic to alpacas?”

“Yes, toxic!” she snapped. “Tons of things can be toxic to alpacas—acorns, azaleas, carnations, hyacinth—”

“She said high,” chortled one of the men as he blew out a fragrant puff of smoke. “Highacinth.”

Reese gritted her teeth. “What the hell do I tell the vet?”

“That your camel likes the wacky weed?” offered one of the men, stepping closer to pet Leon’s neck.

Leon lowered his head and nailed the guy in the groin. The man doubled over and sat down in the dirt.

Another man snorted and pointed at his fallen comrade. “No, but that was funny. How much does the camel weigh? About one fifty?”

At that, the men dissolved into stoner laughter.

Axl stood up and ambled over, stopping to nudge the man in the dirt with the toe of his Doc Marten. When he reached Reese’s side, he gave her hand a squeeze before scratching Leon’s neck.

“He’ll be fine,” Axl insisted. “He’s more like one seventy-five, isn’t he? He didn’t eat that much. Come on, I know a vet who’ll check him out under the table—all hush-hush, you know?”

Reese shook her head. “Why am I not surprised you know a shady veterinarian?”

“Right,” Reese muttered, but she raced out the door after her grandfather anyway.

The two of them scurried down the hill side by side, with Leon ambling behind them, tooting a little as they passed another cluster of alpacas in the pasture. Reese glanced at him, trying to determine whether his eyes were bloodshot or if he was stumbling at all. She knew how to tend to the basic medical needs of small wildlife, but large mammals weren’t her specialty.

Large stoned mammals were way beyond her training.

“Is that Clay down there?” Axl asked.

Reese looked away from Leon and stared down the hill to where Axl was pointing. “Yes. They’re breaking ground today.”

“Thought the bid came in too high and you’re stalling.”

“We’re stalling the construction. We already have the permits, so they can start the excavation while we figure out where the hell to get the extra money.”

“Hmph,” Axl said. “I know a guy who made good money stealing cars. If you want, I could—”

“No. We’re not stealing cars to fund the expansion.”

Axl shrugged. “Suit yourself.” He was quiet a moment, eyes on the construction site as they hustled down the hill. “Seems like he’s done well for himself.”

Axl snorted. “You know exactly who I mean. Don’t play dumb with me. Clay.”

“Mmm,” Reese replied, turning her attention back to Leon. Was he staggering? She couldn’t tell. She picked up the pace, pulling Leon behind her as they approached the winery.

“The boy finally got his shit together,” Axl said.

“Always thought you’d end up with him.”

Reese stumbled on a molehill. She caught herself with a hand on Leon’s back, causing the alpaca to chortle softly.

“Me?” Reese stammered. “And Clay? Why would you say that?”

He shrugged. “The yin and the yang. Twin spirits. All that bullshit, plus he used to drive a kick-ass Mustang.”

“Right, a kick-ass car—the basis for all good relationships.”

Axl looked at her. “You know something better?”

“That’s horseshit,” Axl growled. “You married the wrong guy and you know it.”

“Maybe I was the wrong woman.”

“Of course you were. For Eric. Jesus Christ, girl—you didn’t really think that would work, did you?”

Reese didn’t answer right away. They were approaching the winery barn, and the sound of heavy equipment rumbling through the dirt was vibrating her brain.

“Eric and I had a great friendship,” Reese said. “Our love life was pretty good, and we got along well. Isn’t that what my parents would say is the basis of a great marriage?”

Axl hooted loudly, prompting Leon to echo the sound with a high-pitched tooting noise of his own. Reese looked at her pet, then at her grandfather, wondering who was more stoned.

“Friendship and pretty good sex are not enough to make a relationship last,” Axl barked.

“Is this going to be another one of those lectures about how relationships take work?”

Axl rolled his eyes. “Don’t be an idiot, girl. Work isn’t the secret. The key to any good relationship is keeping your expectations low.”

“I think I saw that on a Hallmark card.”

“I’m serious. You think your grandma and I lasted as long as we did because we sat around swapping roses and dining by candlelight every night?”

Reese frowned. “Grandma ran off with a plumber.”

Axl patted her lightly on the shoulder and nodded. “Good talk, girl. Now let’s get the damn camel off the doobie.”

“This charming romp from Fenske…evokes the best of romantic comedy, with its witty characters and wacky but realistic situations.” – Publishers Weekly (starred review)