Let it Show by Tawna Fenske 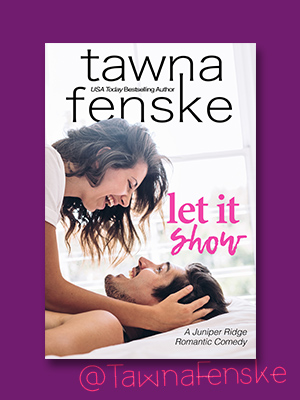 The spotlight’s on them.

Griffin Walsh can’t believe he’s on TV. Yeah, he applied to live at an old cult compound and let cameras follow him around, but a storyline about finding love? Big nope. He just wants a fresh start for his young daughter, plus a shot at digging out of his ex’s debt. He’ll even tolerate the occasional head shrinking session if it means he can run his own brewery again. Just throw him behind a bar and let him fade into the background of his weird new life.

Psychologist Marilyn Judson has spent a lifetime studying people, though usually from the sidelines. Glamming it up as the Shrink to the Stars didn’t help Mari fit with her flashy Hollywood fam, so maybe their new tiny town in rural Oregon is her chance to get it right. She’s sure she can help Griffin get a grip on his trust issues, if only she could stop ogling those perfect dimples.

There’s zero reason Mari and Griffin should click, so why do they keep bonding over bizarre trivia, beer mishaps, and a foul-mouthed bird? Their chemistry’s colossal, but so is the secret Mari’s hiding. The closer they get, the likelier it becomes that it’ll all spill over like a badly poured pilsner. Can Mari and Griffin find a way to banish their baggage, or is it better with their hearts snugged safe in the icebox?