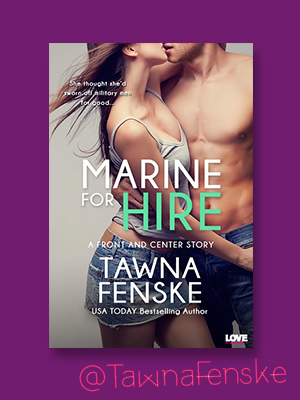 She thought she’d sworn off military men for good…

Sam Kercher is every inch a wickedly hot Marine. Tall. Sexy. Lethal. When his best friends call in a favor, Sam is forced to face an entirely new line of duty—playing nanny for their newly divorced sister and her squirming seven-month-old twin boys. If Sam can dissemble an M16 in his sleep, diaper duty should be a cakewalk…right?

Unfortunately, Operation Nanny isn’t quite that simple. Sheridan has sworn off overbearing military men, so Sam must protect her from her dirtbag ex without revealing just how much he has in common with her brothers. Or that he’s been ordered not to touch her. Ever. Problem is, Sheri’s one hell of a gorgeous woman, capable of making this hard-bodied Marine even harder. And Sam wants her bad.

Protect the girl. Care for the babies. Hide his identity. And keep his hands off. But even the most disciplined Marine has weaknesses…and Sheridan is one Sam might not be able to resist.

Sam jumped. “Here, let me.” He snatched the baby from Mac’s arms and turned to Sheri. “Where are the diapers?”

She opened her mouth to say something, but he didn’t wait. Spotting the changing table in the corner, he hustled the baby over and planted him on the cushioned surface.

With one hand holding the little guy in place, he grabbed a baby wipe from the warmer, testing first to make sure the temperature was okay.

He’d watched his sisters do this a million times, and he’d downloaded a diapering tutorial that he’d watched on his laptop on the flight over.

You can do this, he commanded himself. Think.

The baby screeched with displeasure. He studied the squirming bundle and tried to remember the steps in the

Shit, no. Those were the steps for disassembling an M16rifle.

Well, same idea, Sam thought as he stripped off the waterproof pants and the soggy cloth diaper, using one and

as a shield in case the little guy decided to demonstrate hisaim. The diapering video he’d watched only dealt with the disposable kind, not these cloth things. He was way out of his league here, but maybe some of the steps were the same.

Dammit, no. Something about safety pins or lotion maybe?

He held the little guy in place with one hand as hegrabbed a clean diaper and some pins from the basket beside him. Frowning in concentration, he cleaned off the baby, trying not to gag as he reminded himself he’d seen worse things in military mess halls.

No, no! Goddammit, concentrate. Or maybe those really were the right instructions? He ankle-lifted the baby and slid the fresh diaper under him, then got to work folding and fastening.

He stabbed himself with a diaper pin but didn’t flinch, even when he saw blood welling on the tip of his thumb. He grabbed another diaper wipe and surreptitiously swiped the digit before fastening the last pin in place.

He surveyed his work, nodding once. Not bad. Not bad at all. He’d once set a platoon record for speed of rifle

assembly. This wasn’t so different, and he hadn’t gotten shot in the face.

The baby gave him a toothless grin and gurgled. He grinned back and scooped the baby in his arms, turning to

Everyone stared, no one uttering a sound. Sheri had put the other baby back in his crib at some point, so he stepped forward and placed the fresh-smelling infant in her arms. “Here you go,” he said, feeling stupidly dizzy as his forearm brushed her breast. “Good as new.”

She blinked at him, then looked down at the baby. When she looked back at Sam, he felt his heart flip over in his chest. “Thank you,” she said.

“No problem,” he said, wondering how he could possibly feel so electrified by her with his hands covered in baby lotion and his shirt reeking of reprocessed Gerber.

He picked up the soiled diaper from the changing table and handed it to Mac without tearing his eyes off Sheri. Mac grunted in protest, but took the diaper anyway.

Sheri smiled at Sam. “When can you start?”

“Tawna Fenske should be a must read for anybody who likes humour in their romance. No one does it better ”

“When you find an author who can make you laugh through a steamy book about a hunky Marine posing as a nanny, who can’t cook and entertains a set of twins by demonstrating military tactics…five stars aren’t actually enough.”

“This is one of Fenske’s finest and is a must read for every romantic comedy reader out there. If you’re a newbie to romantic comedies, be sure to cut your teeth on this one.”