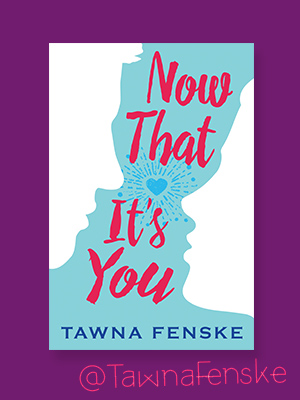 Now That It’s You

Meg wanted closure. She found her ex’s brother instead.

Talented chef Meg Delaney hasn’t spoken to her cheating ex-fiancé, Matt Midland, for two years. Ditching him at the altar after blurting out “I can’t” instead of “I do” would sour any relationship. But now, just as Meg is finally ready to bury the hatchet, she learns closure is permanently off the menu. And the kicker? Matt’s brother, Kyle, is back in her life, stirring up feelings that are equal parts guilt and lust.

Meg was the best thing that never happened to Kyle. He couldn’t make a move on his brother’s girlfriend—even if Matt didn’t value her nearly enough. The situation is even more complicated now that Meg’s bestselling aphrodisiac cookbook has spawned a legal battle with the Midlands. Maybe he should stay away. But love, like family, plays by its own rules. And the one woman he shouldn’t want might be the only one who’s perfect for him.

Nominated for the prestigious RITA Award in 2017!

Meg Delaney kept one hand clenched on the steering wheel as she slammed her fist into the smiley face balloon hovering over her right shoulder.

“Get!” she growled. The balloon bopped between the headrests, leering at her in metallic yellow and black.

“Come on, relax.” Meg’s best friend, Jess, caught a fistful of ribbons trailing from the balloon bouquet and dragged the whole mess out of Meg’s line of sight. “You’re going to crash and kill us both and then how will you explain that to the cops?”

“Not very well if I’m dead,” Meg pointed out, keeping a wary eye on the red and blue balloon that slipped from Jess’s grasp. It bounced bright and cheerful against the backseat roof of her Subaru, broadcasting its “get well soon” message in a loopy script. The weird cursive font made the last word look more like “soup,” and Meg wondered if she should have opted for an edible gift instead of balloons. Maybe a bouquet of cake pops or a tin of yogurt-covered pretzels.

What did etiquette dictate when visiting your ex-fiancé in the hospital after two years of not speaking?

Meg put both hands on the steering wheel at ten and two, trying to ignore the damn balloon lurching in her rearview mirror. There was nothing she needed to see behind her anyway.

“Just keep your eyes on the road,” Jess warned. “Any karma points you’re earning by visiting Sir Cheats-a-Lot in the hospital would be wiped out if you caused a car wreck.”

“It’s not about the karma points, it’s about closure.” Still, Meg loosened her grip on the steering wheel and reminded herself to breathe. The tension in her shoulders had nothing to do with wayward balloons and everything to do with the fact that she hadn’t seen Matt Midland since she’d stood trembling at the front of the wedding chapel and responded “I can’t,” instead of “I do.”

But that was two years ago. Water under the bridge, or something like that. Thanks to the passage of time and the words of a really nice therapist, Meg knew it was time to bury the hatchet, let bygones be bygones, close one door so another one could open and—

“You’re muttering to yourself in shrink-speak again,” Jess said.

“Sorry.” A rainbow-striped Mylar balloon caught a current from the car’s heater vent and lurched into Meg’s peripheral vision. She fought the urge to swat it out of the way as she hit her turn signal and merged into the next lane. Her tires made a shh-shh sound as they cut through a puddle of standing water, and Meg stole a glance at the sky. The clouds looked like pregnant gray bunnies, which meant more rain on the way for Portland.

“What sort of surgery did you say Matt’s having?” Jess asked.

“I’m not sure. His ex-golf partner’s girlfriend’s hairdresser told my mom it’s just some routine procedure. It seemed like a sign.”

“A sign that in a city of 2.3 million people, you still can’t escape weird chains of connection to an ex?”

“A sign that this would be the perfect way to extend an olive branch. He always loved it when people fussed over him when he got sick or had his tonsils out or whatever.”

“Absolutely. You won’t mind if I wait in the car while you run in there with your fence repair kit and balloon bouquet?”

“That’s fine.” Meg steered the car toward the off-ramp that led to Belmont Health System. “Probably best, anyway. I’d like to keep this as simple as possible. Just apologize, wish him well, and move on with my day.”

And with my life, Meg thought, wondering why she’d spent this long stewing and agonizing and thinking bitter thoughts before she’d taken the initiative to reach out to the man she’d been ready to tie her life to. She’d once imagined them sitting toothless in matching armchairs, holding hands while grandchildren frolicked on the floor of their shared nursing home suite. She’d gone from loving him fiercely to hating him with equal ferocity before settling into the murk between those two emotions.

The least she could do was take him some damn balloons.

The “get well soon” balloon bumped the side of her head, and Meg swatted it out of the way as she pulled into a parking space near the back of the visitor lot. Her heart was pounding in her ears, and she wished for the hundredth time she didn’t sweat like a pitcher of ice water when she got nervous. She switched off the car and plucked her blue Where the Wild Things Are T-shirt away from her breasts, trying to get some air flowing.

“You can do this,” Jess said. “And if you do it quickly enough, we can still make happy hour at Sip.”

“Right.” Meg nodded, and glanced at her watch. It was five minutes earlier than she’d aimed for, but that was a good excuse to walk slowly, maybe compose herself a bit.

She took another shaky breath and pushed open the door. With the balloon ribbons in a tight grip, she stepped out onto the asphalt. Glancing down at her jeans and leopard-print Dansko clogs, she wondered if she should have dressed better to visit her ex in the hospital. Maybe high heels and a dress as a concession to how Matt had always wished she’d dressed during their ten years as a couple.

Just be yourself, Meg commanded as she nudged the car door shut with her hip and moved toward the hospital. She’d done a contract job here a few years ago when the hospital hired her to overhaul their food services department, so she knew right where the post-surgical recovery wing was. Gripping her balloons, Meg turned down the corridor and put one foot in front of the other as she breathed in the scent of iodine and cleaning fluid. An auburn curl slipped over her eye and she tucked it back behind her ear, wishing she’d had the foresight to braid it back off her face or put it up in a smart chignon.

But at least she was here. That counted for something.

If she’d timed this right, Matt would be sitting up in bed by now, eating a bowl of lime Jell-O and flipping through television channels. His hair would be perfectly styled already, and he’d be laughing at something on TV, pointing at the ESPN announcer’s tie or the news anchor’s too-bright blouse and making wisecracks to the nurse or the janitor or anyone else who’d listen.

Matt always knew how to draw an audience.

Meg found the room number easily enough and hesitated outside the door. She straightened the balloons, making sure they all faced forward and looked cheery and conciliatory.

What did a conciliatory balloon look like? Meg couldn’t recall standing in line at Hallmark and seeing any balloons that said, “Sorry I left you at the altar, but maybe you shouldn’t have fucked your acupuncturist.”

Meg took a deep breath, then another and another until she started to feel dizzy and wondered what would happen if she passed out on the floor.

At least you’re already at the hospital, she reassured herself as she reached out for the door. It was slightly ajar, and her fingers had just grazed the knob when the door flew open.

A tall, familiar figure barreled through, his face pale and his sandy hair disheveled. Meg jumped back, partly from surprise, and partly to avoid being trampled by Matt’s younger brother, Kyle. His jaw was clenched and dusted with stubble, and as his green-gray gaze locked with hers, he stared like he had no idea who she was.

Okay, that was stupid. For crying out loud, she’d dated Matt for ten years before the wedding that never happened. She and Kyle used to play Boggle and thumb wrestle over the last piece of pumpkin pie at Thanksgiving. She hardly needed to introduce herself.

But the way Kyle was staring at her now suggested otherwise, or maybe it was just the shock of seeing her here. He looked like a man who’d just seen a ghost, or maybe a squirrel humping an aardvark.

He still hadn’t said a word.

Meg swallowed hard and gripped her balloons, forcing herself to greet her former-almost-brother-in-law with the warmest smile she could muster. “Kyle,” she said. “It’s so good to see you. I just wanted to come wish Matt a speedy recovery and take a shot at making peace. Is he feeling up to a quick visit?”

Kyle continued to stare at her, eyes glinting oddly under the florescent light in the hallway. For a moment, Meg thought he might not answer at all. When he finally did speak, his voice was so low she almost didn’t hear him.

“That’s going to be a problem,” Kyle said.

Meg bit her lip. “Because of how things ended? Look, I know I handled that badly and your whole family hates me, but I just wanted a chance to apologize and maybe chat for a minute or two about how life’s going now.”

A tiny muscle twitched in Kyle’s temple, and he studied her, unblinking. “At the moment, Meg, life’s not going all that great for Matt.” His words were clipped and brittle, and Meg fought the urge to take another step back. “And I really doubt he’s going to be chatting with you anytime soon.”

“A funny, poignant reminder that the baggage our exes leave can’t stop love from moving us forward.” –Kirkus Reviews

“This is a heartwarming story with well-developed, artistic characters.”–Publishers Weekly

“How does an author write of death, grief and infidelity and not write a depressing book? By using humor, and comedic situations, of course, and that is exactly what Tawna Fenske does in Now That It’s You.” – Heroes & Heartbreakers