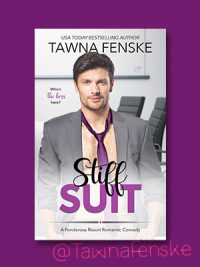 James “Iceman” Bracelyn is wound tighter than a vintage Rolex. Besides his CEO role at Ponderosa Resort, he’s guardian of the family’s biggest secrets, including a doozy that keeps him up at night. Alone. In that big bed he’d rather not share, thank you very much.

That’s fine with Lily Archer, who likes her flings flaming hot and fleeting. Her man-eater rep might be slightly exaggerated, but she’ll gladly dial it up to rescue James from himself—and a bottle of Glenlivit—at his brother’s wedding.

Intimacy’s the last thing either one wants, but it’s tough to dodge when they’re drawn together by the world’s drooliest dog, a TPing escapade gone wrong, and a good old-fashioned desktop hookup. That’s problematic for James, whose ability to hide the family’s riskiest secret is complicated by the secret’s refusal to get the hell out of his guest room.

Can Iceman keep his frigid shell intact while falling for the hottest science geek sex goddess he’s ever met, or will the ticking time bomb blow it all to smithereens.

There’s simply no other way to describe the fact that I’m sitting at a conference table scribbling like a pre-teen girl in a leather-bound journal which I swear to God my sister would have covered with flowery stickers if I hadn’t wrenched the damn thing from her hands.

We’re supposed to be writing our feelings, which is asinine.

What I’m feeling right now is irritated that Bree wrangled us into this conference room under the pretense of reviewing the resort’s Q4 marketing plan. Instead, my freshly pregnant sister blindsided us with a family therapy session complete with a bespectacled shrink named—I kid you not—Dr. Hooter. The esteemed doctor is watching over us like a constipated headmistress who found a frog in her bed.

Mark’s in the corner gripping his pencil in a fist, possibly contemplating stabbing himself in the eye to get out of this. Sean’s scribbling like mad, but it’s probably a to-do list for his wedding in a few days. Even Jonathan’s here, visiting between humanitarian missions and probably regretting this stop considerably right now. He’s been here just a handful of times since our father’s funeral, and I suspect he’ll run like hell once this is over.

She said several other words, too, but I tuned her out because I’m busy thinking about how I need to get back to my office and run the TRT numbers for this week.

Fine, she has a point. The Bracelyn family has a history of bottling up our biggest secrets and shaking the Dom Perignon bottle until it explodes all over our interpersonal relationships. Sean, Bree, Mark…everyone’s done it, which is precisely why Bree wrangled us in here today.

Reading my mind—God forbid—my sister looks up from her journal and smiles. Then she waves her pen like a wand, urging me to keep writing. I’m considering walking out to get coffee. Brazil, maybe.

Then Bree shifts uncomfortably, resting a hand on the rounded bump that’s incubating my nephew, and something softens inside me.

Goddam it, I love my family.

She doesn’t know the half of it.

Has no idea what it’s like to be the oldest in a family sired by a patriarch who changed wives with the frequency his fellow billionaires swap sports cars. Cort Bracelyn never liked cars. He liked women, and he liked spreading his DNA around the far reaches of the earth. That’s why we’re all here.

Maybe the Bracelyn spawn weren’t raised with much connection to each other, but we’ve taken our father’s vanity ranch and turned it into the top luxury resort in the Pacific Northwest according to TripAdvisor, thank you very much.

I miss the asshole sometimes. Our father, I mean.

How’s that for a secret?

Cort Bracelyn—a man whose disinterest in raising children was superseded only by his interest in producing them—still leaves me wishing I could pick up the phone and call him. He always had the best stock tips, and the bastard could make me laugh.

I glance up again and Jonathan’s watching me. Christ, it blows me away sometimes how much he looks like our father. Same build, same cleft chin, same green eyes. He glances at Headmistress Hooter, sees her back is turned, flips me the bird and grins.

Nice. I dip my chin to my necktie, hoping no one sees me smirking. There, that’s a secret, right?

But it’s nothing like the ones I’ve kept for our father. The secrets Cort Bracelyn entrusted to his firstborn are hardly fodder for a journal tucked under my pillow each night.

Some secrets you don’t put in writing.

Some secrets you swear on all that’s holy you will take to your goddamned grave.