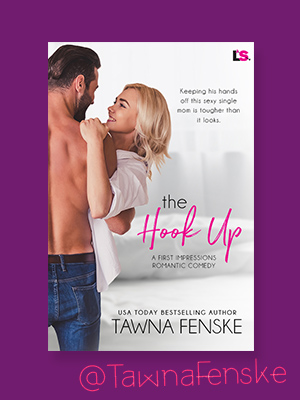 Keeping his hands off this sexy single mom is tougher than it looks.

Ellie Sanders is over the fairytale, thank you very much. Content with her booming career as a purveyor of Madame Butterfly pleasure aids, she doesn’t need a man for anything—except maybe marketing tips. And, okay, a few fun nights with something that doesn’t require batteries.

Love, marriage, and family aren’t in the cards for Tyler Hendrix. Period. The Navy helped Ty put his tumultuous childhood behind him, but when a sexy single mom walks through the First Impressions door looking to take her business to the next level, he feels his carefully constructed “never-get-attached” walls crack.

As Ty and Ellie maneuver through a minefield of wardrobe malfunctions, plumbing mishaps, and the world’s most awkward accidental dirty talk, discovering they have more in common than scorching sexual attraction threatens to crumble Ty’s walls for good…

A hot, shirtless man standing next to her? Hell, his abs alone were crazynuts. He looked like something out of an underwear ad. And the fact that he’d stripped to help her out just added to the appeal.

“Okay, ladies,” Ellie said. “We’re going to start off with a few items from our Tame Me bondage line. This is a great vanilla starter kit for those testing it out or those who want to experiment just a little.”

“What’s that?” called a pretty redhead named Jane. She was the one who’d contacted Ellie in the first place about hosting the party. Most of these women were part of the same book club, though many had brought friends.

Ellie cleared her throat and ordered herself not to get embarrassed. She’d had plenty of conversations like this and was no stranger to frank discussions about sexual aids.

But she’d never had a man in the audience before. A bare-chested, insanely attractive m—

“You can use it to restrain your partner by binding his or her wrists together,” Ellie said, avoiding Ty’s eyes. “Or you can bind him or her to a piece of furniture.”

“What about ankles?” someone called. “Would it work on ankles?”

“Getting that tape stuck on arm hair wouldn’t make me feel good,” someone said, prompting a round of giggles from the audience.

“Yeah, my husband would never go for that,” someone else added. “He has super hairy legs.”

“That’s the beauty of bondage tape,” Ellie said. “It’s non-adhesive. It’s more of an electrostatic cling tape. You can even use it to cover someone’s eyes like a blindfold.”

The women looked dubious, so Ellie tore off a piece to demonstrate. “Here, I’ll show you how it works.” She struggled to bind her wrists together but quickly realized that wasn’t going to work.

“Want help?” Ty’s voice was deep and rich, like liquid chocolate. He stepped closer, so close her arms tingled from the heat of his body. He held out his hands, palms pressed together, wrists angled toward her. His eyes met hers and Ellie shivered.

Ellie flashed back to her conversation with Miriam about flings. He didn’t know, did he?

No. Miriam wouldn’t do that.

Okay, so that wasn’t the only thing making her warm.

She took a deep breath and reached for Ty’s wrists. “Thanks,” she said.

“Like all of Fenske’s book, this one did not disappoint in humor or heat. Who knew fixing a kitchen sink could be sexy?” – Kait Nolan, author of the Wishful series

“Tawna Fenske has a sense of humor you don’t find in Romance novels too often. Realistic characters and situations, everyday life…it’s all in there, with huge amounts of humor. I started laughing on page one and didn’t stop until I finished the book.” – Kelli, Goodreads

“This novel has it all: lovable, relatable characters, and a great story. It had moments that made me smile and moments that brought a tear to my eye. If you enjoy the genre, snag this book and put it at the top of your TBR list.” – Linda Q., Goodreads